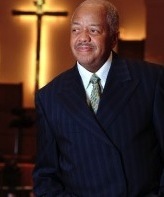 The music industry mourns the passing of gospel vocalist extraordinaire, Daryl Coley, who made his earthly transition Tuesday night, March 15, after several years of health challenges.  He was 60 years old.  You can read more about Coley’s career and passing from the DC Gospel Music Examiner’s Sarah Hearn here.


Many considered Coley’s vocal artistry to be unparalleled.  Erica Campbell, Micah Stampley, Ted Winn, DeWayne Woods, and Anita Wilson are just a handful who name him among their influences.

Homegoing information as released by the family is as follows: 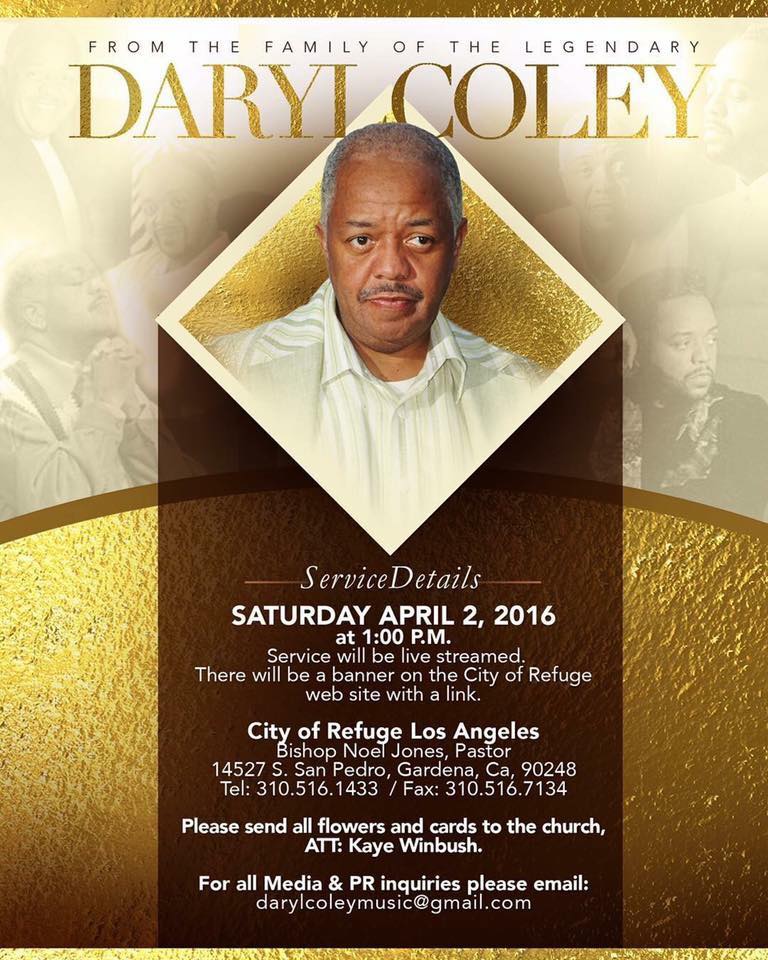 Once the news of Coley’s passing was confirmed last week, after the earlier circulation of false reports, industry contemporaries and protégés flooded social media with remembrances.


Please join GMF in continuing to pray for the family of one of the great voices of our time.

Rest in Peace #darylcoley . You and your voice will be missed dearly.. #RIP https://t.co/03kX93miRH

One of the greatest vocalists ever! He will be missed. Praying for his family. #DarylColeyhttps://t.co/5QSGkq7vvp

We’ve lost one of the greatest men to ever sing #Gospel Music: #DarylColey! Please keep his family in your prayers! https://t.co/7sVmalKNve

An Amazing Artist and Phenomenal Vocalist. You will truly be missed. Love you Darryl Coley! R.I.P.
Posted by Dorinda Clark-Cole on Wednesday, March 16, 2016

I was 24 years old and got a call from Daryl Coley. I knew him very well because Daryl was the one who gave my demo to…
Posted by Kirk Franklin on Wednesday, March 16, 2016

Daryl Coley R.I.P. THIS HERE IS GOSPEL ROYALTY!!!!! Always kind, always loving, always kissing on me when he saw me to tell me how much he loved me. He was the first to give me an interview on my little talk show on the Word Network. Told me he was proud of me. And I haven’t begun to speak of his singing ability that’s just his character!!! THE MOST AMAZING JAZZ-GOSPEL TENOR WITH RIFFS FO’DAYS! INCREDIBLE RANGE WITH VOCAL AGILITY AND CONTROL! My favorite song is “I need your Spirit.” Wait a minute, no, “When Sunday Comes”– love u for real Man of God!
A video posted by Lexi Allen (@lexitelevision) on Mar 16, 2016 at 5:47am PDT

What an amazing gift Pastor Daryl Coley was to the Body of Christ. His heart, message and music impacted each of us. #RIH and thank you for lending your gift to us. I’m praying for his family.
A photo posted by Jason Nelson (@pastorjnelson) on Mar 16, 2016 at 5:32am PDT

When I was younger, he was who I listened to. I remember when my dad first put his tape in. His tone..the heart behind his songs..his signature runs. He captivated me. So..I tried to be like him. I sung all of his songs: from “When Sunday Comes”..to “I can’t tell it all”..from “when the music stops” to “Sovereign”..from “To live is Christ” to “God and God alone”. Every Singer was trying to be Daryl Coley. A once in a lifetime voice. I’m so grateful to have had the opportunity to meet him and have him speak into my life as a kid. He laid hands on me and prayed for me with my dad looking on. He said that God had a big plan for my life..I’ll never forget that. Ever.. #darylcoley
A photo posted by Anthony Brown (@ajblive) on Mar 16, 2016 at 4:05am PDT