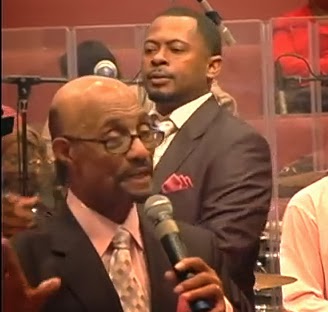 Spencer Taylor has been on gospel’s battlefield with the Highway QC’s for nearly 60 of the group’s 69 years, and at 86 years old, he shows no signs of putting on the brakes.

The Highway QC’s are legendary. This is the same group whose line-up once consisted of Lou Rawls, Sam Cooke, and Johnnie Taylor (no relation). A younger Spencer Taylor probably could’ve chosen the secular road at some point, too; instead, he stuck with gospel. His fans sure are glad.

When I caught up with the dapper Mr. Taylor a while back, he was standing both unnoticed and undisturbed in the back of the auditorium he’d be wrecking in just a few more minutes with his most requested number, “Oh, How Wonderful.” Admittedly, I was impressed that he wasn’t cooped up in a dressing room or luxury bus waiting for his time to hit the stage. Instead, he was just hanging out—chillin’—visibly enjoying the performance of a lesser known quartet. As engaged as he was, he didn’t seem the least bit startled when I approached; and when I requested that he weigh in on his group’s longevity and offer advice to upcoming groups, he chimed in without hesitation.

Well, through Christ….Anything you’re doing…only stands by the Word of God, and that has been our success. Staying with God—you’ve got to stay with God.

[You] must be born again. Be a Christian. If you’re gonna sing gospel, you got to know the Lord. That’s your first step. And I mean, [there’s] no other way around it….This is a must; it’s not a might. You know, you see some people who can sing, and they don’t know the Lord—and I could never try to pick out no one—but they don’t know Christ. They have a good voice, but they don’t realize how far they could go if they just accept Him and let Him be their total controller….You look at all them other people; they make millions of dollars, but if you sing for the Lord, don’t worry about that. You ain’t gotta worry about that, because He will supply your every need.  And that’s so clear, ya know….The first thing you got to do is be a born again Christian…can’t be straddlin’ the fence. Can’t serve two masters; the Bible says you’ll love one and hate the other one.

Sage advice, I called it.

“But it’s right,” Taylor insisted. “What I’m saying is…I don’t know anything to tell you but right. I make a habit of trying to tell people right.”