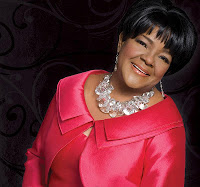 Ever since she was twelve years old, Pastor Shirley Caesar has been living and singing for Jesus.  More than six decades later, the multi-award-winning petite powerhouse shows absolutely no signs of slowing down.  To the thousands who follow her ministry, it seems she not only gets better with age, but more youthful. Pastor Caesar’s ageless beauty, high energy, and lightning quick moves across stages and pulpits all over the world are unparalleled, but it’s her unmistakable sound, unapologetic consistency and unwavering spiritual conviction that have catapulted her into a class all by herself.

Ever since she was twelve years old, Pastor Shirley Caesar has been living and singing for Jesus.  More than six decades later, the multi-award winning petite powerhouse shows absolutely no signs of slowing down.  To the thousands who follow her ministry, it seems she not only gets better with age, but more youthful. Pastor Caesar’s ageless beauty, high energy, and lightning quick moves across stages and pulpits all over the world are unparalleled, but it’s her unmistakable sound, unapologetic consistency and unwavering spiritual conviction that have catapulted her into a class all by herself.

The day I spoke with Pastor Caesar, she was prepping for a relatively light task among numerous undertakings: performing and guesting as co-ringmaster for the UniverSoul Circus in Raleigh, where she resides.  She was also discussing plans for McDonald’s GospelFest 2012, at which she will perform Mother’s Day Weekend in Newark, NJ.  This year’s theme is “Honor Thy Mother.”  It is a theme that’s dear to Pastor Caesar’s heart, for she has always been very candid about her relationship with her own.

“I watched my mom,” Pastor Caesar told GospelFlava.com a few years ago. “She didn’t teach me by word. She taught me by actions. I watched Mama and I watched her feed other folks. I saw my mom give second hand clothes to others in the community. I learned giving and sharing and through that I learned what true ministry is.”

Certainly, Pastor Caesar’s regard for her mother is evident particularly because she has recorded more “mama” songs than any other gospel artist, including her personal musical tribute “I Remember Mama.”  (“Don’t Drive Your Mama Away,” “Faded Rose,” “I Love You Mama,” “Everyday is Like Mother’s Day,” and the country-turned-gospel classic “No Charge” are also part of her mama-themed catalog.)

For “The First Lady of Gospel,” however, ministry is filled with encouragement, admonitions, and old-fashioned mother wit–not just concerning respect for the family matriarch, but for nearly all of life’s twists and turns.  Her anointing to pack a song with power that transforms may very well be the reason she has collected eleven Grammys, something she considers to be her greatest accomplishment aside from salvation.

It was probably that very same quality the late Albertina Walker noticed when she invited a then-teenage Caesar (pictured at far left) to join the famous Caravans in 1958.  By no means was Walker’s group short on talent, but it was young Shirley Caesar’s vim and vocals that helped them soar to new heights.  Fast forward to 2012: if Pastor Caesar had the role of recruiting for an all-star lineup similar to the Caravans, who would she pick?

“Oh wow!  Let me tell you, one of the singingest women I know is Yolanda Adams–I would pull her out there in a heartbeat,” she declares.  “I like Kim Burrell.  I like…now we’re talking gospel, right?”

“Right,” I clarify before appending a second thought, “or if you would like to pull someone from– ”

“Aretha Franklin!” she exclaims without hesitation.  “Yes, yes, that’s my girl.  And my goddaughter who now sleeps was Whitney Houston…oh an awesome young woman gone too soon.”  Pastor Caesar pauses wistfully, but quickly resumes, “There are many other voices out there, and I would include myself right in there with them–you know we have to give [audiences] some traditional gospel…and Vanessa Bell Armstrong, yeah, I would pull her in.  And if it’s still gospel, Gladys Knight and Patti LaBelle!  Wow, don’t get me started with gospel singing and women!”

Pastor Caesar also has high praise for the industry’s newest vocalists.  “We have some powerful young singers out there too that recently won [BET’s] Sunday Best.  I’d pull them in too; those are some singing women.”

Not surprisingly, the Gospel Music Hall of Fame inductee has performed with most if not all of the notables she mentioned.  Is there a dream collaboration that remains?

“Andraé Crouch. I’ve always wanted to sing something with him,” she says.  “But I’d like to do some more on the big screen; I’d like to do some acting.”  To date, Pastor Caesar’s movie credits consist of appearances in The Fighting Temptations, The Unseen, and a cameo in Why Do Fools Fall in Love?  She has also starred in musical stage plays and guested on sitcoms over the years.

For the living legend, acting is not a mere extension of her remarkable career.  Rather, it is yet another means to present her message, her music, and her Messiah to the masses.

____
McDonald’s GospelFest 2012 is set for Saturday, May 12, 2012, at the Prudential Center in Newark, NJ.  Tickets can be purchased at www.ticketmaster.com.

7 Replies to “Shirley Caesar on Today’s ‘Singingest’ Women, Whitney, and the Big Screen”