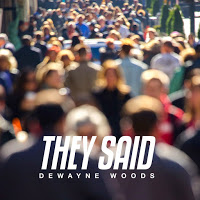 
The award-winning vocalist DeWayne Woods teams up with Lawrence Waddell and Stokley Williams of the legendary R&B band Mint Condition for the third radio single from his best-selling album Life Lessons (Soul Therapy).  The smooth track combines intimate urban balladry with a powerfully revelatory message of God’s love and self-affirmation. “When everybody had given up on me He knew I was redeemable and made me whole,” Woods sings of God’s intervention during his lowest moments.  In the second verse, he hits naysayers with, “Used to be so hung up on what others said about me; so busy casting stones they overlooked their own wrong.”“I’ve made many mistakes and bad decisions in my life and most of us at one point or another have allowed what others said about us to affect us in a negative way, but God has the final word and gives us a second chance,” says Woods, who is currently performing alongside Yolanda Adams and Donald Lawrence on The McDonald’s Celebration Inspiration Gospel Tour running through October. “It’s mind blowing to be afforded this amazing opportunity to be a part of such widely respected national tour and to sing this empowering song to the thousands who have been attending the shows.”
“Working with DeWayne on ‘They Said’ was amazing,” Waddell and Williams said in a joint statement about the song they tailor-wrote and produced for Woods. “He sings with a genuineness and musical sensibility that is at once moving and awe-inspiring. Beyond a vocalist, he is an instrumentalist with words.”DeWayne Woods led a late `90s incarnation of the R&B group Atlantic Starr before making a leap into faith music with John P. Kee.  His debut album, Introducing DeWayne Woods & When Singers Meet, won four of five Stellar Award nominations–including New Artist of the Year and Male Vocalist of the Year.  His sophomore set, My Life’s Lyric, hit  #3 on Billboard’s Top Gospel Albums chart.  Woods’ latest project, Life Lessons, debuted at #2 on Billboard’s Top Gospel Albums chart and features “Never Be The Same” (#23 Billboard Hot Gospel Songs chart) and the Anthony Hamilton & Dave Hollister collaboration “Friend of Mine” (#13 Billboard Hot Gospel Songs chart).