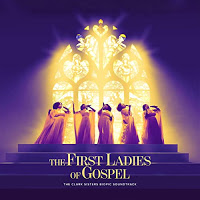 By Libra Boyd
Gospel Music Fever
Clark Sisters fans’ prayers were answered when The First Ladies of Gospel: The Clark Sisters Biopic Soundtrack dropped Friday, just a day ahead of Lifetime’s movie premiere of The Clark Sisters: First Ladies of Gospel.  According to Donald Lawrence, producer extraordinaire and the movie’s music director, the decision to release the accompanying soundtrack was made only the week prior.
On film, Angela Birchett, Raven Goodwin, Christina Bell, Sheléa Frazier, and Kierra Sheard captivate viewers with their portrayals of Jacky, Denise, Twinkie, Dorinda, and Karen, respectively.  On the soundtrack, they amaze with their abilities to recreate the nuances of the sisters’ phrasing, tone, riffs, trills, growls, close harmonies, and the “one voice” (unison singing) that matriarch Dr. Mattie Moss Clark (magnificently portrayed in the movie by Aunjanue Ellis) helped her girls to perfect.  “I Can Do All Things Thru Christ That Strengthens Me,” “Name It Claim It,” and “Nothing to Lose” showcase the real-life vocal talent of the cast, thanks to Lawrence who made sure no element of “The Clark Sound” was overlooked.  Individually, the ladies’ lead vocals are impeccable, resulting in “Name It Claim It” and “What He’s Done for Me” sounding uncannily like the vintage recordings and “You Brought the Sunshine” sounding as if Twinkie herself stepped behind the mic to remake the group’s massive hit.
A fan and student of The Clark Sisters, Lawrence was meticulous about recreating “The Clark Sound” since the movie’s actors would be doing their own singing.  His thoughtful approach even included recapturing the distinctive character of Twinkie’s organ style and sound, which was a dominant musical component of The Clark Sisters’ recordings, especially throughout the 70s and 80s.  Lawrence was particularly intent on recreating the organ’s robust, big room feel for “What He’s Done for Me.” To do this, he and organist Andre Morris tracked the organ at a large church in Memphis with three Leslie speakers.
The First Ladies of Gospel: The Clark Sisters Biopic Soundtrack features thirteen tracks, six of which are spoken-word segments from the movie.  The final spoken-word track is Sheléa Frazier’s spot-on reenactment of Dorinda Clark Cole’s memorable sermonette from the 1982 motion picture Gospel.
In all honesty, the entire project feels like a tease, running at just 27 minutes.  Nevertheless, both emerging and longstanding Clark Sisters fans will appreciate that The First Ladies of Gospel: The Clark Sisters Biopic Soundtrack is a superb salute to the highest-selling female gospel group in history whose story debuted as the highest-rated original movie of the year on all of television.
Favorites
“What He’s Done for Me” – “You Brought the Sunshine”
Fever Meter
SWELTERIN’ (5 of 5 Stars)