A fan approaches Rev. Thomas Spann sporting a wide grin and extending a slightly trembling hand, hailing, “The Legend! The Legend!” Rev. Spann graciously returns the gesture, “My man! Good to see you,” making apparent that he appreciates his supporters as much as they appreciate him. Admiration for the quartet veteran is immediately perceivable by the number of fan interruptions that continue throughout our early evening interview just prior to one of the Brooklyn Allstars’ concerts.
Since organizing the Brooklyn Allstars in 1948, Spann has worked the gospel circuit with his group’s instantaneously recognizable styling, which is directly attributed to his own bass vocals. Along the way, they’ve racked up a couple of gold records (“they say they were gold; I just say they were good,” Rev. Spann interjects) and toured extensively. Now, at 88 years old, Rev. Spann is assisted by a cane and sits onstage with mic in hand during some of the group’s mild numbers such as “No Cross, No Crown.” But you can rest assured that his voice still booms and when the Spirit moves him on tunes like “Stood on the Banks of Jordan,” he springs from his chair to join in with group member Sonny McClary, with whom he now shares lead tasks. Theirs is a sound that stands apart in traditional quartet music.
“I guess that’s what I say the longevity or success of the group is attributed to—the signature sound that I didn’t realize I had for a lot of years until I got a chance to compare it to a lot of other artists; then I realized it was so different that I decided to change it one time,” reflects Spann. He admits that the group almost lost its following when he tried to alter it.
“I was rejected; I had no idea I had that many fans, and I didn’t know that that many people cared one way or another, you know, about what we were doing.” 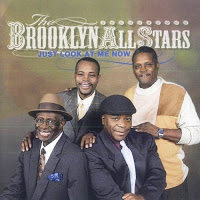 They still care. As a matter of fact, their loyal fan base is what keeps them going more than six decades later; and they’re picking up a younger generation of quartet heads with their current release, Just Look At Me Now. Among the tracks on the Malaco/4 Winds project is a 4-song throwback medley that includes “I’ve Got My Ticket,” a number first recorded in 1950 that Rev. Spann says bears the group’s trademark sound.
“And [our fans] still want us to do that song most places we go right now,” he adds. Hopefully, those places will continue to be many for the man known to his fans as “The Legend.”
____________________
Thanks to Malaco/4 Winds’ Darrell Luster and YouTube, you can watch the Brooklyn Allstars (Rev. Spann with Bobby Butler and Sonny McClary) and Luster rehearse a snippet of “I’ve Got My Ticket” a cappella.