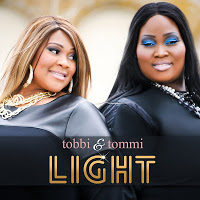 Donald Lawrence describes them as “two of the best sopranos on the planet!” After 12 years with his aggregation, Donald Lawrence and Company, sisters Tobbi and Tommi step forward with their brand new single “Light.”

“Light” shines as a contemporary christian beacon of praise–“Glory, hallelujah, Jesus reigns and there’s access to redemption through His name!”–throughout which the two declare that “Jesus is the Light!”

Hailing from East St. Louis, Illinois, Tobbi and Tommi (formerly known as T&T and The White Sisters) have been immersed in gospel music for as long as they can remember.  Tobbi is also the featured vocalist on the new single, “The Gift,” from Donald Lawrence’s forthcoming 20th anniversary CD.