“You Can Do Anything”
Kendall Triplett (2013)
Available on iTunes 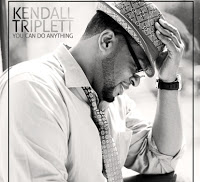 Kendall Triplett could sing R&B; it’s clear he’s been influenced by the genre.  He could dabble in jazz too.  So, I think it’s pretty cool that he’s choosing to bring fresh music to the gospel scene.  Don’t get me wrong though: “You Can Do Anything” is one of those upbeat R&B/pop inspirational tunes that stretches beyond gospel’s boundaries.

The track is written by Grammy nominated songwriter Delisha Thomas (who’s also written for Beyoncé, Janet Jackson, Justin Bieber, et al.). Triplett, himself a songwriter in addition to a talented vocalist, has plans to release a full-length project later this year entitled Lose Myself.