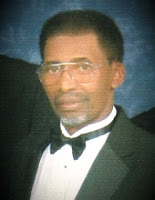 GMF extends heartfelt condolences to the family and friends of Roy “June” Foster, Jr., who passed away December 21, 2017, at the age of 79.
Foster was an original member of The Warrenton Echoes.  The group, according to North Carolina Folklife Institute, is “Warren County, North Carolina’s premier African American gospel quartet. Since the group’s inception in 1957, the Echoes have served as a training ground for North Carolina gospel talent….By the 1960s, the Warrenton Echoes refined their own unique style that featured traditional African American hymns in tight gospel quartet harmony.  Despite their far-reaching acclaim—the group regularly traveled the East Coast and played with groups like the Dixie Hummingbirds—the Warrenton Echoes remained a homegrown enterprise.”

Alongside Foster’s tenure with the Warrenton Echoes, the quartet veteran sang extensively as a soloist.  In 2014, he told The Henderson Dispatch’s David Irvine he’d probably performed over a thousand solos over the years.

Homegoing information for Foster is as follows: