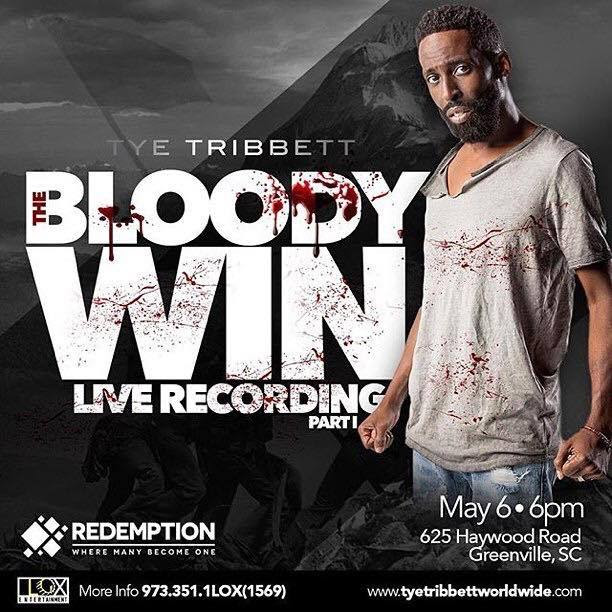 (Nashville, TN)  Two-time GRAMMY®, Soul Train, Dove and Stellar Award winner Tye Tribbett preps for his next live recording, The Bloody Win.  A powerful and highly in demand artist, Tye’s music ministry is a gift to all who experience it–and on Friday, May 6,
he will unleash a new body of work for his upcoming album release. The
recording will take place at The Redemption Center in Greenville, SC. It’s a free concert, open to the public and is destined to be
life-changing. Doors open at 6 PM, the recording begins at 7 PM.
The
radical singer, songwriter, and preacher who’s known for his edgy and
energetic live performances continues to shatter the mold of what is
traditionally known as gospel music. A true innovator, with one of the
most relevant voices of this generation, Tribbett is set to create a
dynamic new caliber of music.
The recording is the follow-up to Tribbett’s best-selling album Greater Than (Live)
(Motown Gospel) which debuted at #1 on Billboard’s Top Gospel Albums
Chart (four consecutive weeks), #4 on Billboard’s Digital Albums chart,
and #9 on Billboard’s Top 200 (all genres). The success of the album led
to Tribbett earning two GRAMMY® Awards for Best Gospel Album and Best Gospel Song, a Soul Train Music Award for Best Gospel/Inspirational Performance, a GMA Dove Award for Contemporary Gospel/Urban Album of the Year and a Stellar Award win for Male Vocalist of the Year.
From the J. Hardy Agency