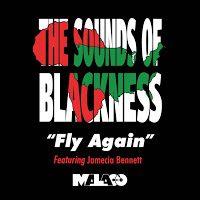 Sounds of Blackness was recently signed with Malaco Music Group (see related post here), and the choir is already set with its debut single “Fly Again” from its forthcoming self-titled CD.

The apple doesn’t fall far from the tree, and like her mother, Jamecia Bennett delivers a signature sound of soulful singing, colorful phrasing, and stirring ad libs on this midtempo inspirational track, all alongside the choir’s staccato vocals which soar to their summit with, “Just hold on and be strong / You hold the key to your victory / Keep your head up to the sky / You’re gonna fly / You’re gonna fly!”

According to Gary Hines, the group’s music director and producer, the single is dedicated to Malaco and to people across the country and world “who have recently suffered unfathomable devastation. Together we will all soon be able to ‘fly again!'”

Expect to hear “Fly Again” all over radio the first of August.

One Reply to ““Fly Again” – Sounds of Blackness”